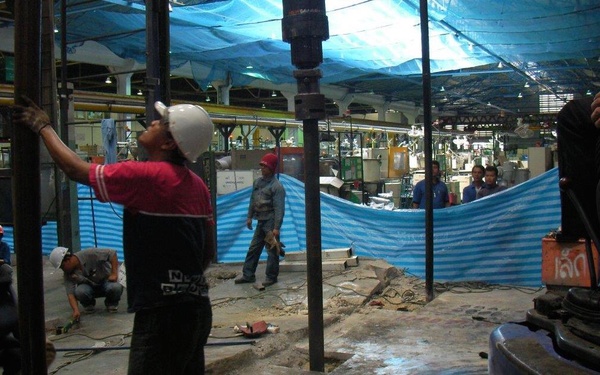 The Bangkok Delta, known as the Cobra Swamp, is littered with large piled factory buildings that suffer from ground slab void formation caused by the delta's sub-terrain water flow & continuous silt movement into the Gulf of Thailand. Just about everything built on the delta is piled through low bearing silt clays into the dense sands founding on rock at 25-35m.

Typically buildings columns are piled under ground beams so the structures themselves don't move but over time adjoining slabs often suffer huge void formation of up to 2.0m. Maximum specified live slab load capacities tend to be ignored. Combined with the floor now acting as a suspended slab due to voids, significant concrete deformation & structural failure occurs. The images below show slab settlement & deformation of +300mm.

Slab deformation renders a building unserviceable & dangerous to machinery & personnel movement. Remedial piling works had to take place without disrupting the 24/7 plastic injection moulding production for clients such as Honda & Canon. To further add to the challenges the factories 220v transformer based electricity supply needed to be moved 2.0m away after the first slab was recast without any loss of power to factory operations.

Note the extent of slab settlement below the blue painted wall in the photo above. Screw pile installation was conducted in closed grid formats to enable movement of machinery from one grid location to another to minimise any production disruption. Production managers were worried about dust contamination to their process. Screwpiling installation limited dust contamination to almost zero.

You get a pretty good indication here of the complex obstructions surrounding the installation. Live high pressure water mains & electrical cable trays were everywhere, (Yes, I know but TIT - "This Is Thailand"). At times it was like threading a needle. A total of 38 x 35m deep 150kN screwpiles were installed over a non stop period of 96 hours using a purpose 7.5t excavator with cab removed. As the screw piles were installed new concrete pile caps & slabs were cast.

One of the many projects we have done in Thailand and probably one of our best examples of onsite flexibility.